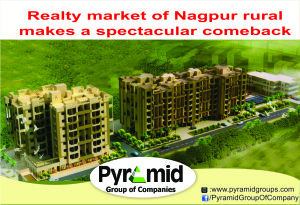 Stamps and Registration office of Nagpur rural area mopped up 203 per cent revenue from real estate transactions during 2014-15.

THE real estate market in rural areas of Nagpur district is once again zooming in the hope that BharatiyaJanata Party (BJP) andShiv Sena led State Government can take some favourable decision for the growth of realty sector. During last financial year (2014-2015), Stamps and Registration office of Nagpur rural area mopped up 203 percent revenue from real estate transactions. But, at the same time, Nagpur city registered downward growth and achieved only 80 per cent target, highlighting slump in realty market. Though disappointing in termsof number, the city has contributed Rs 675 crore by way of stamp duty as against the target of Rs 839 crore and is remarkable considering weak demand for high-end flats. This is clear indication that property buyers are now concentrating more on properties in rural areas and those situated just outside existing municipal limits since properties inside city areas are costlier. The figures of Stamps and Registration Department of Nagpur division show the clearcut picture of changing trendand migration from city to rural areas, where metro region is coming and on Wardha Road, even the Metro Rail is proposed. However, experts stated that this could not be termed as jump in the sluggish realty market. It may be mentioned that Union Minister NitinGadkari and Chief Minister DevendraFadnavis have assured property dealers to start improvement in the rural sector. They had batted with previous Democratic Front Government for granting permission to layouts and small townships upto 750 meters from Gaothon. As per clause, the layout situated upto 200 and 300 meters can get permission for changing from agricultural zone to yellow zone for construction purposes. During DF Government regime, Town Planning department official had granted illegal non-agriculture permission to several layouts beyond permissible layout. Taking corrective step, then Collector PravinDarade had rejected around 250 non-agriculture permission and issued stern guidelines to stop unscrupulous land dealers from exploiting people, due to which growth of real estate business in rural areas slowed down. Now, the winds are flowing towards northward direction hoping that the new Government may amend the clause and provide relief to them. Earlier, Fadnavis and Guardian Minister ChandrashekharBawankule also raised the issue of illegal colonies at BesaBeltarodi, Ghogali and others in the vicinity of orange city at various forums of the Government to legalise it. Presently, they are at the helm of affairs and people believe that they can regualrise these constructions by framing guidelines to ensure planned development. New Government has also given attention towards development of stalled MIHAN-SEZ project. Till now, the project failed to take off due to various reasons but with a big push from Chief Minister Fadnavis and Union Minister Gadkari once again the project has been revived. Air India has started maintenance of aircrafts at Maintenance, Repair and Overhaul (MRO) depot. This has also increased expectations of common man regarding development of Nagpur and Vidarbha region. Experienced by earlier trends, the Stamps and Registration Department had set target of Rs 75 crore only from Nagpur rural area while a sum of Rs 839 crore is expected from Nagpur city, Rs 56 crore from Bhandara, Rs 64 crore from Chandrapur, Rs 53 crore from Wardha and Rs 8 crore collection from Gadchiroli. Nagpur city and Bhandara district did not achieve the target while other areas have crossed the target. Gadchiroli witnessed Rs 13 crore (162 per cent) transactions of stamps papers, while WardhaRs 58 crore (109 per cent), and ChandrapurRs 64.50 crore (102 per cent). Bhandara mopped up only Rs 53 crore (94 per cent) and Nagpur city only Rs 675 crore (80 per cent) and Nagpur rural area mopped up Rs 152 crore (202 per cent). It may be mentioned that earlier, real estate business in Nagpur rural market was a low key affair. Till 2008-09, it was Nagpur rural that had spearheaded realty growth when Wardha road land was sold like a hot cake. The land and open plot transactions had registered a tremendous growth then. However, the enthusiasm was cooled down with failure of MIHAN and regulatory issues like NA permissions, probe conducted into bogus NA nod leading to delay in sanction by town planning department. This had shifted the growth from rural to city areas. Now, once again market may be shifted from city to rural areas. In orange city, new rates of Stamps duty fetched crores of rupees for the State Government. The Stamps and Registration Department is charging 6.5 per cent (including 1 per cent of Local Body Tax). The abolition of LBT from August 1 may also provide a great relief to buyers.